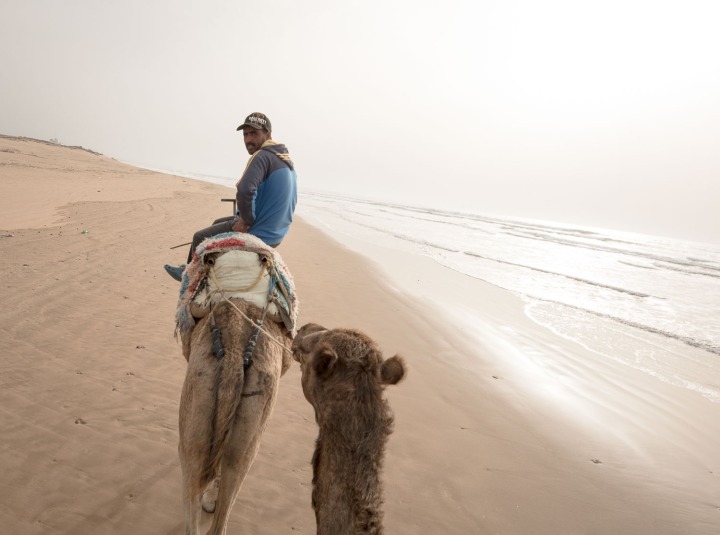 I’m so backed up on my blog posts. I still have 10 days in Cyprus to write about, and then a week in Geneva… and today I’m off to Annecy for only 24 hours, followed by Lyon for the weekend. I can’t seem to get caught up.

Western world problems, I know. Cry me a river.

But hey, right this moment I am reading the brilliant gay-traveller-turning-50 novel Less by Andrew Sean Greer. I have nothing in common with this character at all (cough cough) but it’s hilarious. I’m at the part near the end where Arthur Less is in Morocco checking out the camels, which he describes as having “sock puppet heads and their hay-bale bodies, their scrawny little legs…”

And I laughed out loud. LOL! Sock-puppet heads! Totally. spot. on.

Arthur Less got me thinking about my time in Morocco and how obsessed I was with camels. No kidding, every time I saw one of these absurdly odd creatures I’d stop and think: “Look, a camel!” and then pull out my camera and take a photo. Except for one time when I was walking home from the big French grocery store, bags on each arm and no camera, and this guy is walking his camel on the sidewalk. You don’t see that every day.

People asked me if I felt safe in Morocco as a solo female traveler. Absolutely. When the worst thing you have to worry about is stepping in camel poop pellets on your way home from the grocery store, you’re good to go.

ANYWAY. I want to talk more about camels. I included a couple camel pics in my Essaouira post, but it was sort of a “yeah, hey, I rode a camel” mumbled casually, like when you’re at a party and no one’s listening and you don’t want to look like a pretentious prick, but you still want to tell somebody about it.

Have you ever wondered what it’s like to ride a camel?

No? Well, I’ll tell you anyway. These goofballs are stiff, clumsy and uncoordinated. They’re like old men with bad knees, which means getting up or laying down is a major ordeal.

First, you climb aboard while he’s on the ground: it’s just like getting on a horse, but think doublewide, with all the groin-stretching that word implies.

If you sit directly on the hump he’ll complain a bit, so you have to scootch all the way forward, as far as you can. Then he stands up only his hind legs with his butt in the air, which may cause you to tumble forward and onto his sock-puppet head if you’re not holding on tightly. Then his shaky front legs come up and you’re good to go.

I wanted to give this a try for one hour, because I’d contemplated doing a 3-day camel expedition in the desert and I had to be sure before I booked it. All i have to say is, it’s a good thing I did a trial run.

Here’s what it’s like: while your camel thumps and bumps along the sand, your legs are splayed wider than a gynecologist’s chair, hard leather saddle grinding into your pelvic bones and stretched-out inner thighs. The poor creature walks like he’s on a perpetual bender, rocking and lurching with every step. It would be a disservice to horses to say this is a similar experience to horse riding. Can you take a guess whether I booked that 3-day trip? No thank you.

My guide told me I could sit side-saddle. Hey, thanks, but I’m too cool to sit side-saddle, even in the middle-of-nowhere Morocco where no one knows me or cares. But after 30 minutes of thumping and bumping, I finally relented and swung one leg over to the other side. My pelvic bones thanked me.

In all seriousness, despite all my complaining it’s a cool experience for kids or someone who’s camel-obsessed. For a kinder, gentler experience, just have a drink at Beach and Friends in Essaouira right by the camel hangout. You can grab a lounge chair and a beer and take pictures of camels. And cats. Plenty of cats in Morocco.